A budget of USD 500 is good enough to get you a decent acoustic guitar, especially if you are a beginner. Melodyful provides you with information about the latest brands and models of acoustic guitars, which can be purchased without drilling a big hole in your wallet. 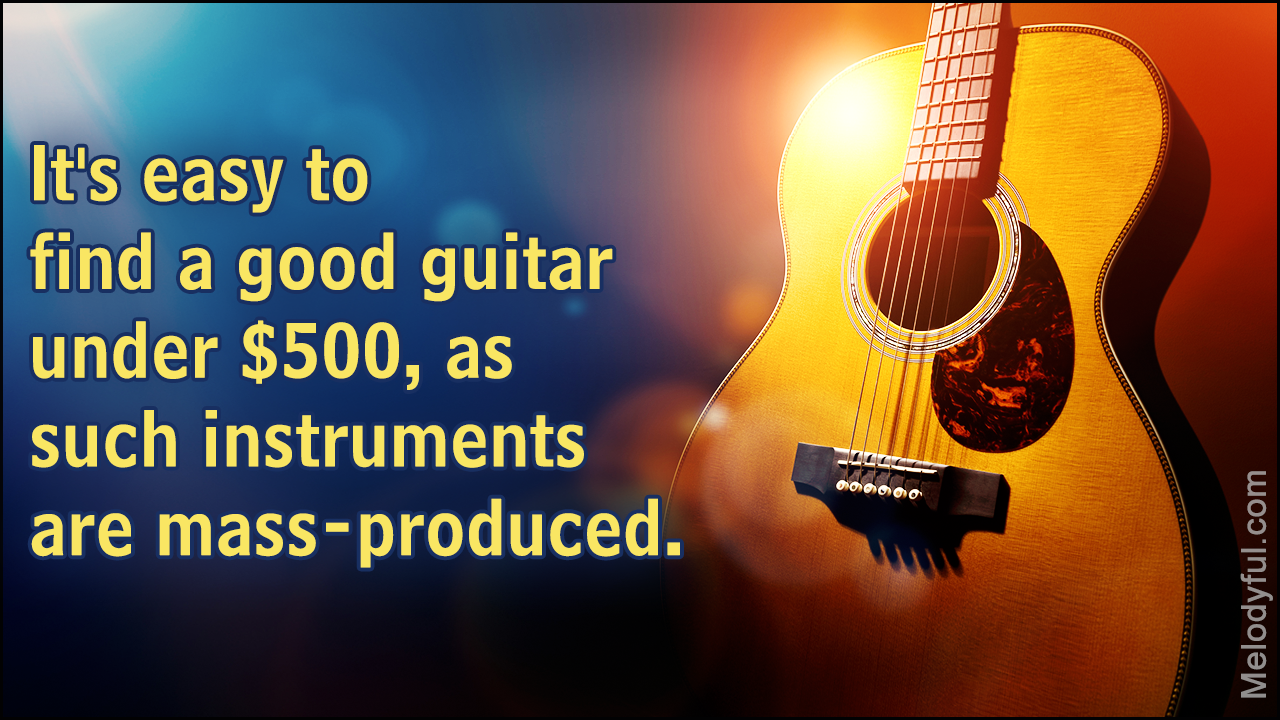 A budget of USD 500 is good enough to get you a decent acoustic guitar, especially if you are a beginner. Melodyful provides you with information about the latest brands and models of acoustic guitars, which can be purchased without drilling a big hole in your wallet.

In order to ensure that an acoustic guitar is in good condition, keep it in a hard or soft case. Replace broken strings or bridge pins in time.

Budget-conscious people have an option of choosing between expensive guitars, which have an amazing sound, or less expensive ones that are priced below USD 500. Such musicians are usually beginners, and hence, they tend to opt for the second option, which of course is more or less the right one. Being low-priced does not mean that their sound is worse than that of the premium brands; after all, bringing out the right sound is mainly dependent on the musician, and less on the guitar make.

The style, looks, and color of your acoustic guitar do not matter as every piece is unique. It is your fingers and your method of playing that are going to make the instrument sound the way it should―beautiful and soulful. It is easy to find a good guitar under USD 500 because such musical instruments are mass-produced and supplied in large numbers in the market. While purchasing, just make sure that the neck of the guitar is not bent or curved, and there is no dent or crack on the body. Also, confirm whether the particular brand of low-priced guitar that you are selecting is popular among the masses. The following section describes the best acoustic guitars under the USD 500 range. The order of description is random, and not specific according to the ranking.

The CG142C is a nylon string-based guitar, which is favored by classical musicians. Though not as popular as the Alvarez models, the sound produced by this parlor-shaped Yamaha product is crystal-clear and tends to reach more treble-dominated highs than bass-dominated lows. With 19 frets, its fretboard is a bit small. The body is made from mahogany with a top consisting of American cedar. The bridge and fretboard are made from rosewood material. Its neck is made from a three-layered ply. The entire guitar body is given a glossy finish after the manufacturing process is done.

Priced around USD 400, the Yamaha CG142C is a good investment for beginners who want to make their career in classical music, especially the Spanish, Latino, or the Mexican type.

If you want to buy a guitar that is priced below USD 500, then by default, you should opt to buy the S6 model from Seagull. Touted to be the king among guitar manufacturing companies, the best and by far the most popular guitar model belonging to this company is the S6. The body is made out of cedar, the sides and back portion are made out of Canadian wild cherry, and the fingerboard and bridge parts are made up of rosewood. A striking feature of these models is that the guitar head or a headstock is designed in a tapering and pointed manner, which is usually not seen in acoustic guitars. Due to this, strings placed in the middle portion are positioned a bit close, causing a decrease in tension in the strings. Whatever tension is present is transferred to the central portion of the strings.

Made in a hand-crafted manner, the cost of this guitar hovers around USD 400, and it varies from area to area.

One of the most affordable guitars for amateurs, the Taylor Big Baby consists of a body made out of Sitka Spruce. The back portion of the instrument is slightly curved in order to ensure maximum comfort to the player. The sides and the back portion are made up of wild cherry wood. A smaller kind of this guitar model is called the Taylor GS Mini/Baby Taylor, which is a scaled-down version of the Big Baby model. It offers the same type of soothing tone, and is comfortable to play for people who do not prefer large-sized guitar models. This guitar has also been named as one of the top grossing models in this year, in terms of popularity.

Costing USD 400, this instrument will provide you with a warm and mellow sound along with the option to be carried as a travel guitar!

This list has probably done justice by including another Yamaha guitar model. This instrument is in the form of a dreadnought shape and consists of a body made out of Engelmann spruce. The fretboard is mostly made up of ebony, and the handcrafted body sides and back consist of rosewood. This model is known for producing a warm and loud sound, which at the same time, also produces resonance and reverberance. The neck is made up of a three-layered ply of mahogany with the fretboard attached on it. In its most natural appearance, it can belong to the category of instruments that can be included below the 500 dollar mark. If you need a model with a darker color, you will have to shell out a bit more.

Costing around USD 490, this model just makes it into this list of guitars that are priced under USD 500, but promises to be a worthy investment regarding learning this instrument.

A very old guitar manufacturing company, Washburn has been making these instruments for more than 100 years. A striking feature of the WD150SW model is that the entire body consists of solid wood. The back portion of the guitar is made out of mahogany, and the front portion from spruce. Both types of wood are in a solid form. The bridge and fingerboard parts are made out of rosewood, Thus, the combination of these wood types ultimately produces a warm and rich sound with amazing tonal clarity while playing this instrument. The headstock is also made out of rosewood type.

To increase the charm, the manufacturers have set up an abalone rosette around the sound hole, making it really irresistible to buy this model, which is priced at roughly USD 480.

The warm sounding AD90 model of this company is fast gaining popularity among musicians who want to venture into the classical stream. Alvarez is an American company, which was established about half a century ago. A peculiar feature of this model is that the body is a combination of Sitka spruce wood along with Acacia Koa wood. The former makes up the front portion, whereas the latter is of Hawaiian origin, and forms the sides and back portion of the guitar. This wood is more expensive than the traditional ones like mahogany, spruce, rosewood, etc., but the result provided by it is reflected in the tonal variation and a sharp and soothing sound is produced by this guitar.

Its cost hovers around USD 500, but the investing in it is a worthy one.

A list of low priced guitars would not be complete if an Epiphone model was absent. The EJ-200 is arguably the most attractive product present in this list. Along with its striking features, the warm, melodious, and soothing sound produced by this model is unmatched by any other one, irrespective of the body make and design. Combined with a maple body and a front layer of spruce, the rosewood fretboard consists of 20 frets, and ending in an exotic finish at the lower side. With an awesome appearance of the bridge in a kind of wavy form, this dreadnought-shaped product easily wins among the beginners.

Priced below USD 400, this guitar model is a collector’s item.

This model has been specifically designed to appear more or less as an old guitar, which is present at least since about 100 years or so. A vintage look is added to this guitar model, and hence, the series has been named as Vintage series of this manufacturing company. Most of the characteristics are very similar as that of the WD150 type.

A rustic feel of the R314 model can be rarely seen among acoustic guitars that have a low price. This product is priced at around USD 480 as its predecessor.

A lesser-known brand, this guitar is manufactured by a company known as Blueridge. Though not very popular, the sound quality produced by this guitar is mellow and soft with less volume. It is preferred to be played for country songs, and this characteristic can be guessed just by its appearance―simple, yet elegant. The body is made from 7-ply mahogany wood, while the top is made from spruce. A glossy finish is imparted to the finished product, and overall, the guitar has a sturdy and firm body, which can be used by beginners to start off with their musical journey.

The cost of this model is around USD 300, though prices may vary.

The last model name in this list, the Backpacker guitar is a favorite among musicians who are constantly on the move. The Martin company is known for producing lightweight, clear-sounding products that are very popular among beginners and budding musicians. As this model is small in size, it can easily fit in your backpack, and hence, the convenience aspect is its greatest advantage, apart from its appearance and sound quality. The body is made from tonewood, with the top consisting of spruce. The neck is made from hardwood. The shape is somewhat triangular, with the narrower end continuing onto the fretboard that has 15 frets. All the frets are scaled down accordingly with that of a normal guitar’s frets.

The board and the bridge are made from Richlite material as it helps to decrease the weight of the model. Basic prices start at around USD 350.

It is recommended that every beginner or amateur musician should always buy a guitar that is less expensive, till he/she develops the required guitar skills and masters them; high-priced guitar models can always be bought during the later years. In this case, the products costing around USD 500 and lower are the most preferred ones, as with a further drop in the cost range, the quality of the model purchased might get worse.