Dear Aaron, many years ago, 15 to be exact, I was the opening act on a Christmas tour you did with the Blind Boys of Alabama, Mavis Staples, Chrissie Hynde, and others. It was 2003. I had just turned 23. It was the first call I ever got to do a big tour. I was terrified. I was excited. I wasn’t quite ready.

I had just been signed to Rounder Records; full of unchecked hope. Everything seemed to be falling into place. All my childhood dreams were being realized, and so soon. My friend and mentor had tried to warn me, just months prior, that it might not always be this easy. I remember his speech, backstage at a blues club in Chicago. “You might have to pay your dues or you might not. But you might. And it might be 2 years. It might be 5. Maybe even 10.” I remember thinking he was wrong. Really wrong.

A couple of months later I was backstage in Columbus, Ohio doing vocal exercises in my own dressing room at the Palace Theatre. Night one of the big tour. It was a smash. You weren’t there as you had yet to join the tour. After the show, I was confident. I was proud. I couldn’t wait for the next night.

The next night was Boston. You were also not on this night’s bill.

As I approached Boston, something didn’t feel right. I had a feeling of being unwelcome somehow. The Berklee Performance Center had not listed me on any of their advertisements or on their website. (Crowds don’t like these kinds of surprises.) The hospitality team had ignored my logistics questions and I wasn’t sure where to go or whether there would be a meal provided before the show. When I found the venue, there was nowhere to park. Again I tried calling. No answer. That night, was record-setting cold, though it was only early December. It was biting. I drove around awhile, getting lost on the strangely laid out streets of Boston before finally settling for a spot nearly a mile away. There wasn’t much time to spare and I remember this walk being unusually hard. There was a nor’easter on the way. I was born in snow country, but this wind was crueler than any I ever knew. By the time I arrived at the venue, following a ten-hour drive and a long frigid walk, it was almost show time and I was treated coolly. The soundcheck was less than a minute. There was no access to the green room for me and no meal. I was tired and hungry. But, that couldn’t temper my excitement for the show.

The faces were angry; arms crossed. Talking could be heard throughout. I looked into the large audience and saw the faces of my label folks. Rounder was there. They were looking around at the rest of the audience; uncomfortable. I was surprised. It wasn’t the first time I had experienced a disinterested audience, but it was the first time of this proportion. I had only done a couple of songs. The crowd was restless. I said, “I’m Clarence Bucaro. Thanks for listening, I have a few more songs left.” Then the boos came.

I was too young to understand it in that moment. I was angry. I was humiliated. I was afraid. I played one more song, the shortest song I had and walked off the stage prematurely. People clapped……because I was leaving the stage.

After the show, everything felt surreal. I had nowhere to go while the Blind Boys of Alabama rocked the crowd. There was no green room to reflect or even cry, which is what I wanted to do. So I walked the giant staircases of the Berklee Performance Center. Ever so often, a patron would walk by, on their way to the restroom, and I would try to catch their eyes, as if to test if this was all real. It was real. And no one looked back.

The next day, I drove back to Ohio, where there was a day off before the next show in Boulder, Colorado; which was to be your first date on the tour. My phone rang often that day. There was a review in the Boston paper.

“Clarence Bucaro, 23, was a strikingly unfortunate choice for opener. A solo songwriter from Cleveland with a pallid, pretentious vocal style in debt to Andy Gibb, Bucaro shares an attorney with the Blind Boys. Oddly, he’s been picked up by Rounder Records. Without stage presence or solid songs, Bucaro is at the level of an open-mike hopeful, yet he’s being pushed as a future star. He was given 40 minutes. When he announced that he had a few more songs, crowd members booed.”

This was just part of the review. My attorney was humiliated. My label’s credibility questioned. I was going to be taken off the tour. Other promoters for later dates had heard about the episode and took me off their shows. I lost the Beacon Theater. I lost San Francisco. I lost Philadelphia. I even got hate mail. Imagine that. People went home that night and looked me up, a kid, just to tell me how much they despised my music.

I recall that by the time I arrived in Ohio, where I was to spend the night at my parent’s house before an early flight to Denver in the morning, everything had changed. I was awaiting the call from my attorney on whether or not I would be allowed to stay on the tour. I didn’t know what I wanted. I called my mentor. He had already heard what happened. He talked me into staying on the tour. “Beg if you have to,” he said. I did and they allowed me to do some of the remaining dates.

So the next night I took the stage in Boulder, Colorado. I had never known how deep one’s own vulnerability could run, until that night. I looked out at the faces before my first note and I was ashamed. However I carried on, and the crowd was kind. In the middle of the set I remember saying, “Thank you. You don’t know how badly I needed this. Thank you.” to the audience. Then, when I started to walk off the stage, I noticed you standing there; on the side of the stage clapping. You had watched the set and as I passed you, you offered some words of encouragement, though I don’t remember exactly what they were. I’m not sure if you had heard what had happened the night before or not.

From that night on, you stood there every single show; watching me. You were the first one to say, “good job” when I left the stage, and in some cases, the only one. I remember, after a show at the beautiful Royce Hall in LA, you hugged me. On the last night of the tour, in Washington DC, you pulled me aside and said, “You have something really special. Keep going.”

The tour, as a whole, was a complete failure with a resounding impact on my future. The fallout from Boston was great. There was more bad press; more bad feelings; more emails. After the tour, I went to Ohio for the holidays and I wondered what was to become of everything. It seemed that everyone had cooled to me almost overnight. My team went into hiding. My label stopped returning my calls. In the coming months, they dropped me (citing the Boston event as too much to get past). The opportunities stopped coming. I was devastated and confused. I remember all of January and February, holed up in the bedroom of my childhood, listening to Bill Evans and Coltrane. It was the winter I discovered jazz and loneliness.

A year later, things had changed so much, that the next time I visited Royce Hall, it was as a flower delivery man. After the incident, I lost sight of who I was for a while. I felt rudderless. I moved all over the place; first to New Orleans then to Los Angeles and finally, New York.
I became very bitter in those years. It took five years for me to put out another record. When I did, I found that everything was very different from my pre-digital days at Rounder Records. But I’ve kept going, though it’s slow going much of the time. Nothing comes easy. Perhaps it’s timing. Maybe it’s “the past.” Maybe I’m still not ready. Regardless, I still make music. And I think about you from time to time and wonder if people ever know the way they impact others.
I have thanked you many times in my head over the years, and during difficult times, when I wonder if I should just quit, I still see you standing there on the side of the stage and it helps me. And today, the thought occurred to me, that maybe you’d like to hear this. That “thank you,” might make you realize how your actions helped someone. So Aaron, if you read this. Thank you! 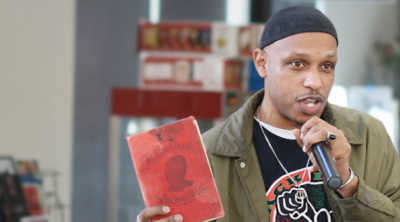