A Beginners Guide on How to Read and Play Bass Tabs

The bass guitar is definitely the more curiosity-rattling instrument in the stringed instrument family. If you're looking to learn it, you're in for a grand time.

The bass guitar is definitely the more curiosity-rattling instrument in the stringed instrument family. If you’re looking to learn it, you’re in for a grand time. 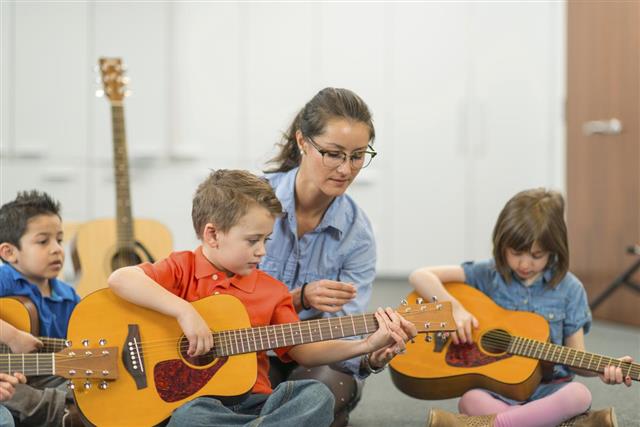 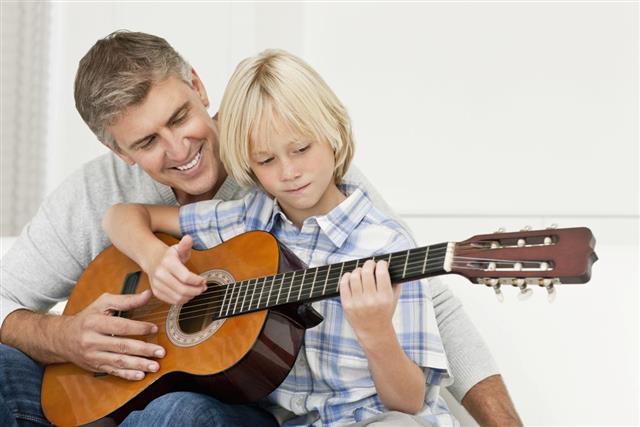 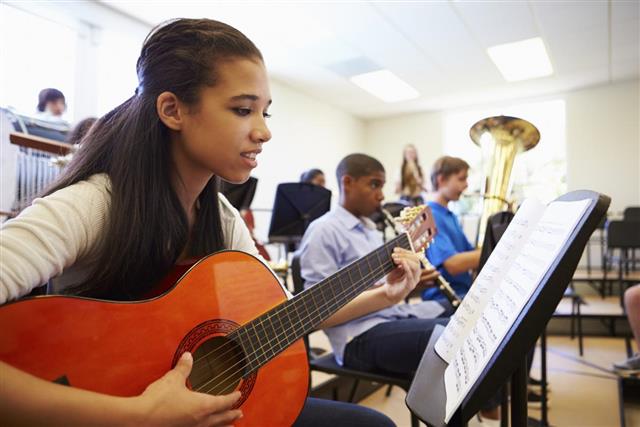 A bass guitar, exclusively used for generating a low musical notes, is widely used in various genres of music like, jazz music, rock music and instrumental songs. Bass guitars are different from acoustic and electric guitars and have certain peculiar characteristics attached to them.

Before we begin, I’d like to resolve a common misconception amongst musicians that you need to learn the guitar before the bass. That is not true. In fact, if you’ve decided on playing the bass early on, it becomes that much easier. Most people think that if they cannot play the guitar, they can switch to the bass because it has only 4 strings so it should be easier. Bassists like these are found everywhere and end up struggling with basic bass concepts. I’m not saying that you can’t play both, just that the reason for you to pick the bass shouldn’t be anything apart from your interest in it. Also, they both may look pretty much the same, but that doesn’t mean they are played the same way. There are a lot of differences, both visible and subtle, that separate the instruments by quite a gap. A bassist can effectively make or break a song depending on what he plays. That said, I assure you that being a bassist is intensely fun and just as awesome (if not more) than being a guitarist.

Bass tabs are read and written the same way as guitar tabs, except for the B and high E strings. So what EADGBE is on guitar can always be translated into the EADG on the bass. In fact, once you start learning theory and can play a bass-line fluently, reading guitar tabs becomes an easy way to figure out harmonies and scale-play. We leave all that for a later stage. For now, let’s concentrate on reading a bass tab and playing it.

The strings are placed the same as a guitar – the low E at the bottom with the A, D and G on top like so:

Drawn above is the standard bass tuning, you will find in most bass guitars, from the lowest to the highest open notes. You also get 5 and 6-string bass guitars. If a tab shows the use of them, all you have to do is switch the same notes up one octave. The fretting hand needs to travel a bit across the strings, but you’ll get it with some good hours of practice. You can play the notes on the lower octave. It won’t sound as good, but at least you get the job done.

Bass guitars have around 20 to 24 frets. These numbers will be indicated on the string which is being played. Fret numbers are used to suggest notes.

What the above tabs tells you to do is start on the E on the 1st fret. Go higher to the 3rd fret. Then change strings and play the 3rd fret on the A string, then the th fret on the same, followed by the 5th fret on the E string thrice. The trick with the bass is, these tabs usually show only the basic ‘play this note after that note’ pattern. You rarely understand the time for which you play each note, the strength with which you pluck the string or even if there is a hammer or a slide between two notes.

This is one part very important to understand – use the notes as the fundamental blocks and build the piece of music according to your own style. If you think the note is to be played for half the time instead of full, do it. Things like muting each string at the right time, taking a hammer instead of slide (or vice versa) make an enormous difference in the sound that others hear. The sooner you can develop your own style of playing, the faster you pick things up and the more popular you become.

In the above example, bars on all strings are shown by a vertical bar line. This is similar to the manner they are represented in standard notation.

Like I said, you won’t find a lot of tabs that show the proper time, but you can find the proper rhythm. It’s usually given right below the tab itself, corresponding to the notes on the tab.

In the above example, you will notice an eight note count mentioned below the fret numbers.

You may come across a few more markings on bass tab apart from the regular ones. There are no set standards for these markings and therefore you may see changes in them. These markings only suggest the way you are supposed to play the notes. Markings can be on the strings, beneath the strings or sometimes even at the beginning.

Common markings on strings and their interpretations

Note that the last three markings are indicated below the strings. Ghost notes are rather important while playing the bass, since a part of it also delves into percussive play. They are nothing but notes (usually the open string) played completely mute, so that you only hear the pluck (the beat) and not the note itself.

Some tabs will be given in a proper time grid so you know exactly how long you should play a note. This is often represented by a thick straight line joining two fret numbers. A dot right after the thick line (before the next note starts) represents the exact moment where the note stops.

The best way to get the proper timing is still through learning and reading sheet music. Of course, a lot of rock songs don’t have sheets written for them, so tabs will suffice for now.

A good way to practice alone is with a metronome. It’s a small device that tells you the tempo with a ‘tick-tock’ sound. It helps you stay in tempo and time each note to perfection. Like if you had to play a half-note while the metronome plays a measure of 4 ticks (tick-tock-tick-tock), you will play the note for the first two ticks (tick-tock. The other two stay empty). Similarly a quarter note would be only one tick, a full note would be the whole 4 ticks and so on. It is important to practice this way. It can be frustrating to maintain tempo in the beginning; most of us get carried away by the pace and the energy of the song, but it’s important to stay in tempo at all time.

• Swing, Swing – The All-American Rejects
Smoke on the Water – Deep Purple
• Ice Ice Baby – Vanilla Ice
• With or Without You – U2
• Where the Streets Have no Name – U2
• Otherside – Red Hot Chili Peppers
• Can’t Touch This – MC Hammer
• Pink Floyd – Money
• Smells Like Teen Spirit – Nirvana
• Come as You are – Nirvana
• Highway to Hell – AC/DC

You can find a lot of beginner level tabs on the internet, which are easy to learn and play. There are certain books available as well which serve this purpose. Start practicing as much as possible, as it will only help you learn quickly. Once you get the hang of it, you will be amazed at the tunes you are able to dish out. 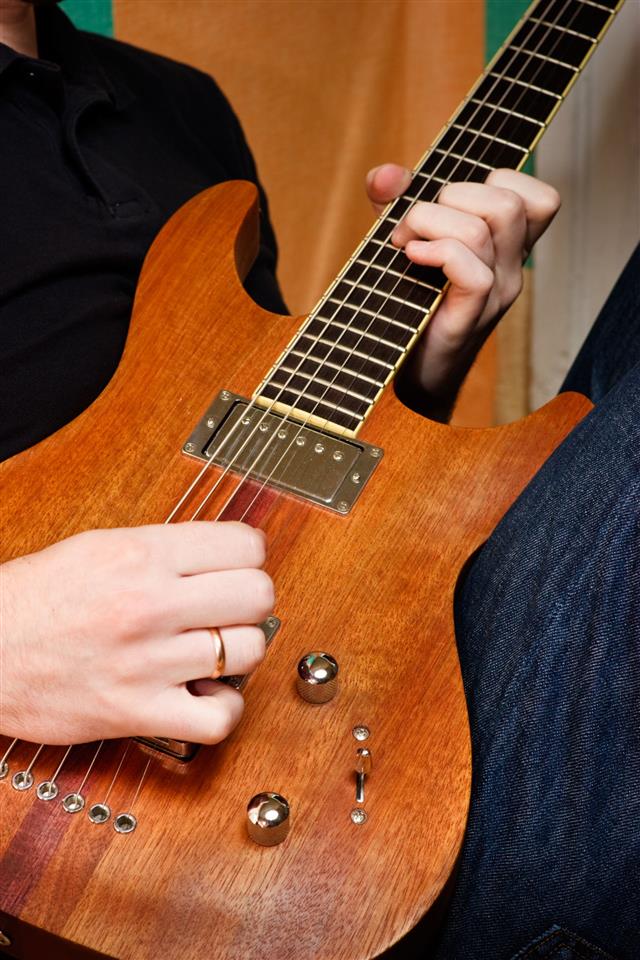