Jazzy, bluesy, and warm-sounding, playing a trumpet requires a lot of skill and practice, particularly for beginners. Apart from pressing the right valves, you also need to have an amazing control over your blowing power. This article provides a few reference charts, especially for amateur musicians. These charts display different finger positions that can be referred to while playing a trumpet. 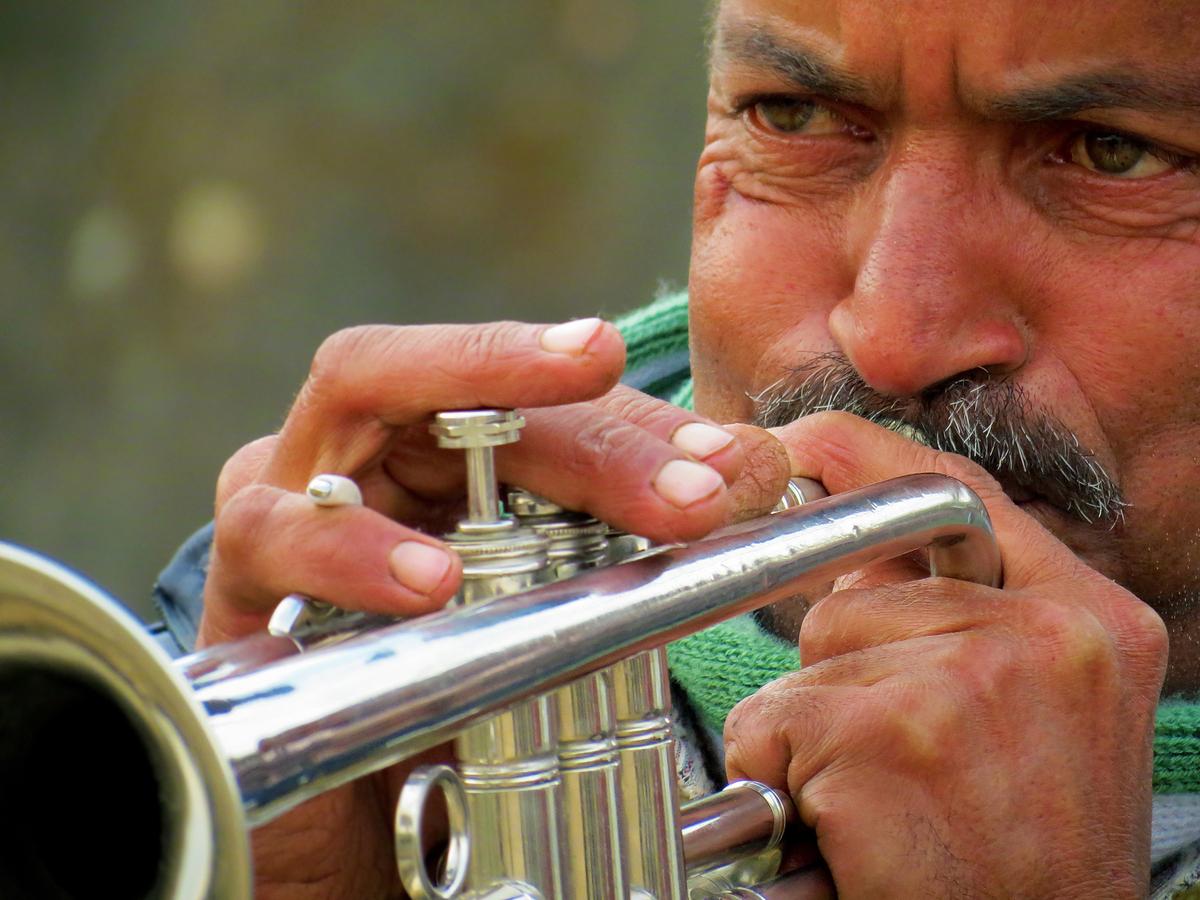 Jazzy, bluesy, and warm-sounding, playing a trumpet requires a lot of skill and practice, particularly for beginners. Apart from pressing the right valves, you also need to have an amazing control over your blowing power. This article provides a few reference charts, especially for amateur musicians. These charts display different finger positions that can be referred to while playing a trumpet.

The world’s largest working trumpet is present in Cape Town, South Africa, and measures a massive 114 feet in length and 18 feet in breadth! This design is called ‘vuvuzela’, which was made for the 2010 FIFA World Cup. It took about 3 months to be completed.

A trumpet is a brass wind instrument that is played by blowing air into a pipe-shaped opening, and produces high amplitude sounds. It is probably one of the first musical devices or instruments (made around 1500 B.C.). The trumpet mainly consists of double-winded pipes with two openings; the larger one is the output sound outlet, while the smaller one is for blowing air. Three button-like valves are fixed on the upper side of the pipes, where they can be pressed by the index, middle, and ring fingers, respectively. They are also called piston valves, as small pipe-like structures are fitted at their bottom, which makes it easy for applying pressure.

Most trumpets are in the B♭ (read B flat) tuning, though a few types can also be played in other tuning variations, like A, C, D, E, F# (read F sharp), etc. When the valves are pressed, the length of the pipe tubing increases, resulting in a warm and richly-textured sound. The pitch and intensity can be changed by adjusting the blowing aperture and related tension so that different scales can be played accordingly. This is also called embouchure, which is used mainly to produce different overtones (frequencies of sound waves that have high amplitude than the basic ones). The blowing hole continues into the cup, and the sound tone can vary with the cup size; larger cups usually lead to an output of deeper or lower octave notes. At the same time, the valves are pressed as per the scale notations. In some types, rotary valves are also present, and in some modern varieties, a musician can use sliders to enhance the quality of the sound produced.

It’s fairly difficult or rather impossible to learn to play this instrument if you do not have adequate information about using the instrument valves. Also, a good control over your blowing power will help you to practice different notes, scales, and even play in higher and lower octaves. The chart illustrations provided below will help in figuring out the various fundamental notes and scales, especially if you are a beginner.

The above illustrations represent three octaves of trumpet scales starting with F#. The numbers indicate the valves that are to be pressed, whereas, the open valve numbers are not written. In case a note is played without pressing any of them, the word ‘open’ is written below the notations.

Each note has a particular sign that signifies its intensity and position along the notations. For example, in the given chart, the note D# is represented by the symbol #O in the first octave, and is played by pressing the valves numbered 2 and 3. The note placement is also shown on the staff lines, which are running parallel along the entire chart width.

When you have practiced individual notes to perfection, start playing trumpet scales so that you can properly judge your skills accordingly. Refer to the trumpet major scale sheet provided below for this purpose.

In the above images, signs marked x mean that the valves are closed, while those appearing o means that the valves are kept open. All 12 major scales have been illustrated in these pictures. For example, the D major scale consists of the following notes: D / E / F# / G / A / B / C# / D, which are played as – xox / xxo / oxo / ooo / xxo / oxo / xxo / xoo. The valves pressed for each note can be written in the following form: 1 and 3, 1 and 2, 2, open, 1 and 2, 2, 1 and 2, 1, respectively for each note. Make sure that you control the input force, and adjust the embouchure accordingly.

Let us see another method to play minor scales. Consider the desired one as being relative to a major scale, whose 6th note corresponds to the minor scale 1st note. For example, the F major scale consists of the following notes: F / G / A / A# / C / D / E / F. The 6th note is D. Now start playing the scale from this note and continue in the same succession as given; you will get the minor scale of D, i.e., the notes will be same as given in the first example – D / E / F / G / A / A# / C / D.

Apart from pressing the right valves, also keep in mind that blowing properly is extremely important, as this will define the quality of sound produced. This is possibly only when you steadily gain experience while playing the trumpet. You have to be extremely patient while learning this instrument, and daily practice is mandatory, to be a good trumpeter.