What inspires music making? Love! And it's close cousin, hate! Some of the best lyrics come out of pain and agony. Melodyful lists down the top 10 songs about revenge, both for men and women. 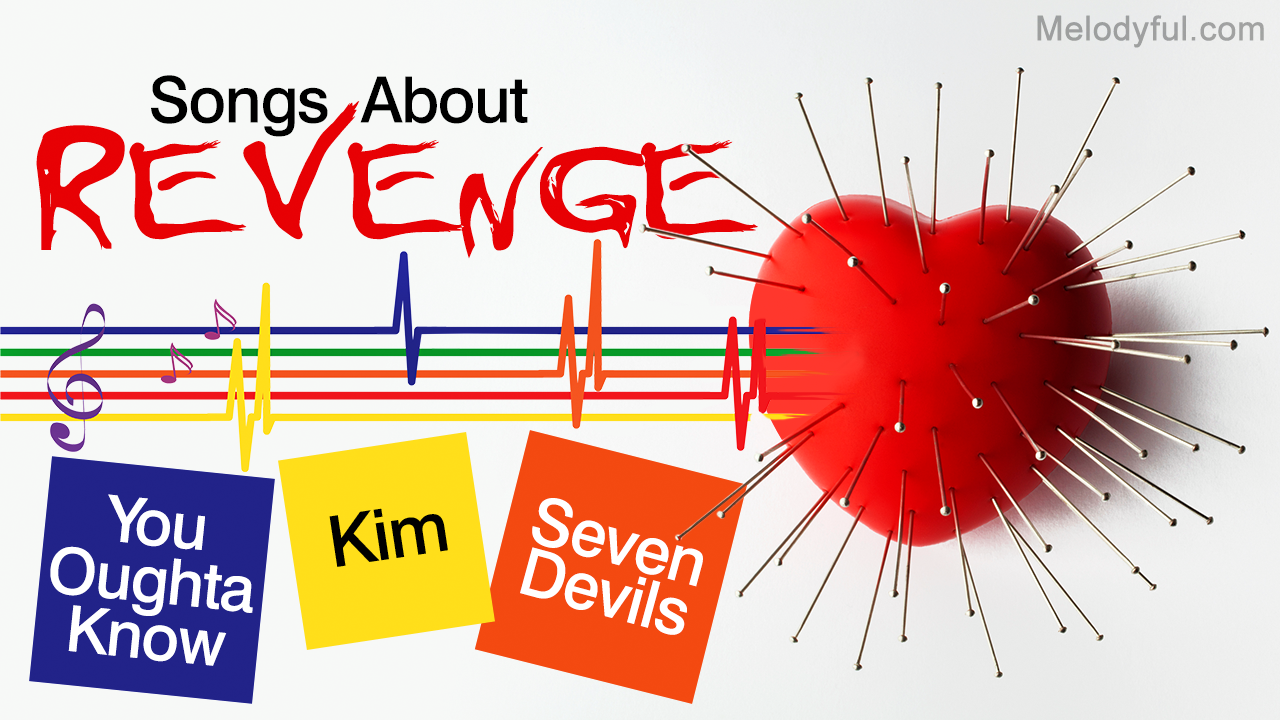 What inspires music making? Love! And it’s close cousin, hate! Some of the best lyrics come out of pain and agony. Melodyful lists down the top 10 songs about revenge, both for men and women.

In 2009, Eminem threw a slew of insults to Mariah Carey through his song Bagpipes From Baghdad, and also included her now hubby Nick Cannon in it. In response, Mariah dropped a single entitled Obsessed!

There are plenty of artists who have venomous spite for their ex-lovers. They get ditched, are left heartbroken, and then there’s a bash―a new album released that is swashed with anger, suffering, cheat, and betrayal feelings. Along with the recovery feed. But when you’re a celebrity and you have a bitter falling out with your boyfriend/husband, at least you still have all that wealth and fame, right? Rock stars: 1, Normal People: 0.

The thing is, if we were some popular celebs and we broke up, we’d surely make a tune about them. They say, it’s the best form of revenge.

Anyway, let’s get back to “real” life. Just broke up with that (place the jerk description word of choice here) ex-boyfriend of yours? You just came out of an abusive relationship? Found out that your (ex)lover cheated on you? It’s time to vent out your anger and get over how he wronged you. Even if you don’t actually go and haunt your ex for revenge, listening to such kinda songs will definitely soothe your soul. If you share a common circle of friends, why not throw a song dedication on him while hanging out in nightclubs (thank me later!)? Jokes apart, add these tunes to your playlist, forget all the other sad, lovey-dovey, and mushy ‘I miss you’ songs, cling to some rocking country melodies, and be a better version of you. Well guys, here’s a treat for you too. Check out the most popular tracks about taking a revenge on your (ex)love.

Alanis Morissette – You Oughta Know
Livid Lyrics:
‘Cause the love that you gave that we made wasn’t able
To make it enough for you to be open wide, no
And every time you speak her name
Does she know how you told me you’d hold me
Until you died, till you died
But you’re still alive.
Released: 1995
Album: Jagged Little Pill

A song that drips with poison. Probably written for “Full House” star and former lover Dave Coulier, the song was the turning point for Canadian singer Alanis. It’s about all the hurt feelings of seeing your ex move on with someone new. A song full of anger and bitterness, but eventually tells a story of success. The blunt honesty of the lyrics and Alanis’s chippy voice will be relatable to anyone facing that situation.

Carly Simon – You’re So Vain
Livid Lyrics:
You walked into the party like you were walking onto a yacht
Your hat strategically dipped below one eye
Your scarf it was apricot
You had one eye on the mirror as you watched yourself gavotte.
Released: 1972
Album: No Secrets

With super-sour opening lyrics, this song is about a self-absorbed lover, who would obviously care about him more than his lover. The song was a number one hit in US, Australia, and Canada.

Carrie Underwood – Before He Cheats
Livid Lyrics:
That I dug my key into the side
of his pretty little souped up 4 wheel drive,
carved my name into his leather seats,
I took a Louisville slugger to both headlights,
slashed a hole in all 4 tires…
Maybe next time he’ll think before he cheats.
Released: 2005
Album: Some Hearts

This song is an ultimate revenge song. It is about a woman who gets cheated on, and grabs the chance to destroy her boyfriend’s car. She does a lot of damage to his truck. This is done to make sure that this man will think twice before he plans to cheat. Being the one that was cheated on is horrible, but we think this guy got it worse in the end.

Eminem – Kim
Livid Lyrics:
Too bad bitch, your gonna finally hear me out this time
At first, I’m like all right
You wanna throw me out? That’s fine!
But not for him to take my place, are you out you’re mind?
This couch, this TV, this whole house is mine!
How could you let him sleep in our bed?
Released: 2000
Album: The Marshall Mathers LP

This is an example of revenge fantasy against his now ex-wife Kimberly Scott Mathers, who is the mother of his daughter Hailie. The tempestuous rapper literally talks about killing Kim, her boyfriend, and child. The lyrics are so powerful and hurting that it drove Kim to suicide, when the rapper performed on it at a hometown concert in Detroit. A screaming track altogether, but a treat for Slim Shady fans!

Pink – So What!
Livid Lyrics:
And guess what?
I’m having more fun
And now that we’re done/I’m gonna show you tonight
I’m all right, I’m just fine
And you’re a tool.
Released: 2008
Album: Funhouse

When Pink got separated from her husband Carey Hart, it was the most peaceful breakup in history. Their breakup was so cool and friendly, that he even appeared in her music video for this song, acting as … himself! They then had a union, and gave birth to a little baby girl, Willow. Ah, bless. This song became the highest-selling single in the US.

Justin Timberlake – What Goes Around… Comes Around
Livid Lyrics:
Is this the way it’s really going down?
Is this how we say goodbye?
Should’ve known better when you came around
That you were gonna make me cry
It’s breaking my heart to watch you run around
‘Cause I know that you’re living a lie
That’s okay baby ’cause in time you will find …
Released: 2006
Album: FutureSex/LoveSounds

A song that talks about the belief in Karma. This pop-R&B song compels you to believe that the bad done with you will be returned two-fold to the one who harmed you. It’s a vicious circle: you hurt someone, and you get hurt back. Your exes will surely suffer if they wronged you in any sense; that’s Karma’s promise! Umm, sounds soothing isn’t it?

Kelly Clarkson – Never Again
Livid Lyrics:
I hope the ring you gave to her turns her finger green
I hope when your in bed with her, you think of me
I would never wish bad things, but I don’t wish you well
Could you tell, by the flames that burned your words
Released: 2007
Album: My December

This song is about an abusive relationship. The man in the relationship hits his partner, and the woman spends a lot of time excusing the behavior and dealing with it in her own way. (The way most women, who have to experience this horrible situation, do.) However, the woman doesn’t spare him, she gets her revenge. Ah, inspiring to do something?

Justin Timberlake – Cry Me a River
Livid Lyrics:
All of these things people told me
Keep messin’ with my head
You should’ve picked honesty
Then you may not have blown it, yeah
You don’t have to say what you did
I already know, I found out from him
Now there’s just no chance
For you and me, there’ll never be
Released: 2007
Album: My December

Justin and Britney―a picture-perfect couple in old times. Since The Mickey Mouse Club happened, they seemed a couple meant for each other. But they split, and then this song was released, mentioning about Spears cheating on him. He even cast a look-alike to Britney in the song’s video.

Florence and the Machine – Seven Devils
Livid Lyrics:
Holy water cannot help you now
A thousand armies couldn’t keep me out
I don’t want your money
I don’t want your crown
See I have to burn
Your kingdom down.
Released: 2011
Album: Ceremonials

This is a powerful song. Florence conveys helplessness projecting uncontrollable anger. This much-talked-about song was played in the season finale of the popular TV series Revenge, and also in the famous series Game of Thrones, just to remind you.

Blu Cantrell – Hit ‘Em Up Style (Oops!)
Livid Lyrics:
When your man wanna get buckwild
Just go back and Hit ‘Em Up Style
Put your hands on his cash
And spend it to the last dime
For all the hard times
Oh
When you go then everything goes
From the crib to the ride and the clothes
So you better let him know that
If he messed up you gotta hit em up.
Released: 2001
Album: So Blu

This song tells the story of a woman who gets back at her man by shopping with his credit cards, not paying his bills, and selling all his stuff. No, Cantrell doesn’t encourage this, but one of her girlfriends did something on similar lines. It’s just her way of showing how a woman can counter-attack if her man screws up. This song earned a Grammy for the best R&B song. The jazzy type voice was very much liked and is probably one of the best songs by Cantrell.

Broken heart is the biggest inspiration to songwriting. We’ve seen time and again, how celebrity musicians pounce back on their exes through their tracks. But, Taylor Swift definitely needs a bow. She has crossed all records in making revenge songs. Nearly every boyfriend she has had―and lost―has gotten his own T-Swift song!

There you have it! This was our list of best revenge songs! Music does the work of a balm on our soul, but to take revenge in the real sense, work tremendously hard, and let success be your best revenge. And leave the rest to Karma. Do tell us about your favorite revenge songs, and the ones that we missed out.