46 Famous Songs About Bullying You Have to Listen To

Bullying is any repeated act by an individual other than yourself that makes you feel less of yourself. Would you believe it if we told you artists like Rihanna, Lady Gaga, Justin Timberlake, Taylor Swift, and many others were picked on during their childhood? If they didn't let the haters slow them down, then why should you? Here are some songs about overcoming the trauma of bullying just to lift your spirits. 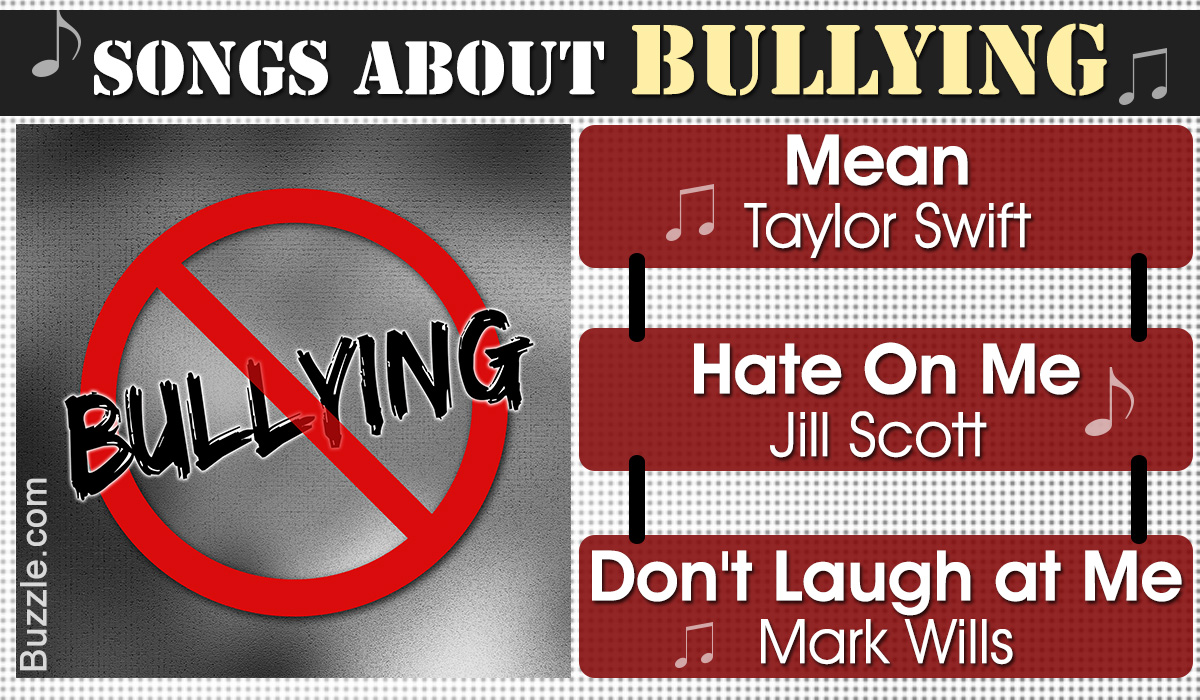 Bullying is any repeated act by an individual other than yourself that makes you feel less of yourself. Would you believe it if we told you artists like Rihanna, Lady Gaga, Justin Timberlake, Taylor Swift, and many others were picked on during their childhood? If they didn’t let the haters slow them down, then why should you? Here are some songs about overcoming the trauma of bullying just to lift your spirits. 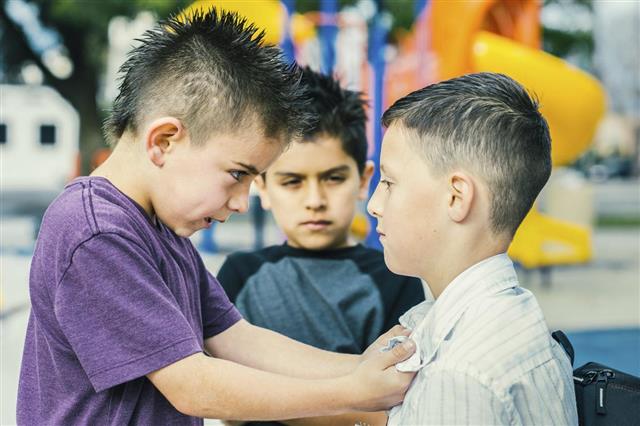 According to the Department of Health and Human Services, 1 in every 3 children in the United States has been subjected to bullying.

Bullying can be described as the use of force, either physical, verbal, or emotional, to dominate others. This behavior is usually habitual and repeated. The perception that the bully is either physically or socially superior than the other seems to be one of the biggest contributors to this heinous act. The strongest determinant of this perception is perhaps the approval of this act by the most influential person in the bully’s life. 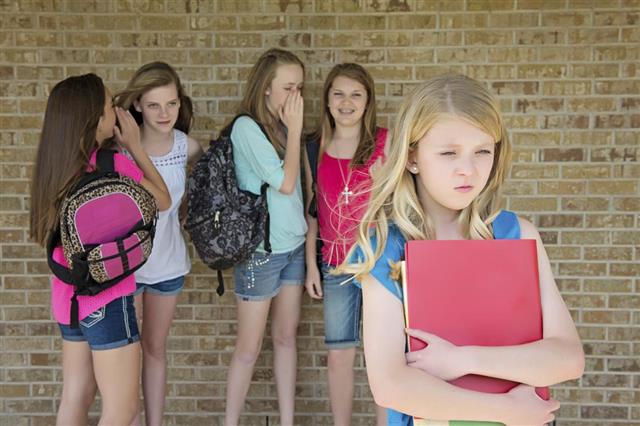 People who usually bully others are generally seen to have suffered domestic abuse themselves, were the victims of bullying, suffered from low self-esteem, or seem to lack empathy. The act of bullying isn’t just limited to your school playgrounds or hallways, adults might be victims of bullying at their work place as well. No matter where you are or what your situation is, nobody has the right to take your dignity away from you. The only thing that powers these bullies is the silence of their victims. So raise your voice and stand up for yourself, alert the concerned authority.

You may not believe it, but as mentioned earlier, many notable artists and celebrities were socially aloof, and hence, bullied in their school days. They very well know what it feels like to have everyone constantly telling them that they aren’t good enough, but they stood their ground! They took refuge in what they believed in and continued to work towards their goal. Here are some songs by some of these artists that narrate their struggle to overcome bullying in their own unique style.

My mama told me when I was young
We are all born superstars
She rolled my hair and put my lipstick on
In the glass of her boudoir
There’s nothin’ wrong with lovin’ who you are
She said, ’cause He made you perfect, babe
So hold your head up,
girl and you’ll go far
Listen to me when I say
I’m beautiful in my way
‘Cause God makes no mistakes
I’m on the right track, baby
I was born this way

This song written by none other than Lady Gaga, is about accepting and loving who you are and knowing that you’re perfect, in the classic poignant style of the Lady herself. Released in February, 2011, this song was loved by all and went on to top the charts in over 25 countries, in the U.S., it topped the Billboard Hot 100 chart.

What we love about this up-tempo song is the lighthearted humorous reaction Taylor Swift has for her ‘haters’. It’s refreshing to hear someone just ‘shake off’ these haters rather than being the lying-in-a-ditch-crying-my-eyes-out victim, or may be writing a vengeful song to let them know what they did was wrong (Taylor played it cool, right?) This song released in August, 2014, and it definitely shook its way off to the number one position on the Billboard Hot 100 chart.

Ooh, if I gave you peaches outta my own garden
And I made you a peach pie, would you slap me high?
Wonder if I gave you diamonds out of my own womb
Would you feel the love in that or ask why not the moon?
If I gave you sanity for the whole of humanity
Had all the solutions for the pain and pollution
No matter where I live, despite the things I give
You’ll always be this way, so go ‘head and
Hate on me, hater, now or later
‘Cause I’m gonna do me, you’ll be mad, baby

The powerful voice of Jill Scott will definitely blow your mind. She so rightly explains that no matter what she does, haters will definitely find a way to hate her. She adds that the haters can hate her all they want, but she ain’t backing down. This R&B song was released in 2007 that earned Jill the 24th place on Billboard’s Hot R&B/Hip-Hop Songs chart as well as a Grammy nomination for Best Female R&B Vocal Performance in 2008.

Made a wrong turn once or twice
Dug my way out, blood and fire
Bad decisions, that’s alright
Welcome to my silly life
Mistreated, misplaced, misunderstood
Miss ‘No way, it’s all good’
It didn’t slow me down.
Mistaken, always second guessing
Underestimated, look I’m still around
Pretty, pretty please, don’t you ever, ever feel
Like you’re less than fucking perfect
Pretty, pretty please, if you ever, ever feel
Like you’re nothing, you’re f***g perfect to me!

The badass-chick P!nk described this song as one of her greatest songs (you know that, that’s a big thing when the song has competition from songs like Rockstar and Raise Your Glass), and we’d have to agree with her! This song sends a message of loving yourself, it narrates a person’s battle to accept one’s imperfectness via a struggle of depression, self doubt, and enormous pain. This song was released in December, 2010, and it single-handedly earned P!nk a Grammy nomination for the Best Pop Solo Performance, and it peaked on the Billboard Hot 100 at the number two position.

Don’t Laugh At Me

I’m a little boy with glasses, the one they call the geek
A little girl who never smiles
‘Cause I have got braces on my teeth
And I know how it feels to cry myself to sleep
I’m that kid on every playground who’s always chosen last
A single teenage mother tryin’ to overcome my past
You don’t have to be my friend but is it too much to ask?
Don’t laugh at me, don’t call me names
Don’t get your pleasure from my pain
In God’s eyes we’re all the same
Someday we’ll all have perfect wings, don’t laugh at me

This country song written by Mark Wills made its debut in July, 1998. This song tells the story of how people who get picked on just because they’re different feel. It limns the trauma of young children, the struggle of a teenage mother for acceptance from her peers, a homeless person’s search for compassion. Mark calls this song as one of the strongest songs that he’s recorded that talks about dealing with life in general. This song garnered the number two position on the Billboard Hot Country Songs countdown.

This alternative metal song by Shinedown is about self-empowerment. It inspires you to stand up for yourself, to fight for your self-respect, and not let anyone push you around. Released in January 2012, this song topped the charts on the Billboard Mainstream Rock.

You Had to Pick on Me

Coward of the County

One of These Days

Dare to be Different

Born to be somebody

One Of These Days

Don’t You Just Hate Those People?

Shake Them Haters Off