The 10 Greatest Hits of Daft Punk

One of the best and most popular duet musicians in the genre of electronic and house music, Daft Punk has entertained millions of fans all over the globe in the last two decades. Read this Melodyful article, which enlists the greatest hit songs of this band, that spawned a new generation of music. 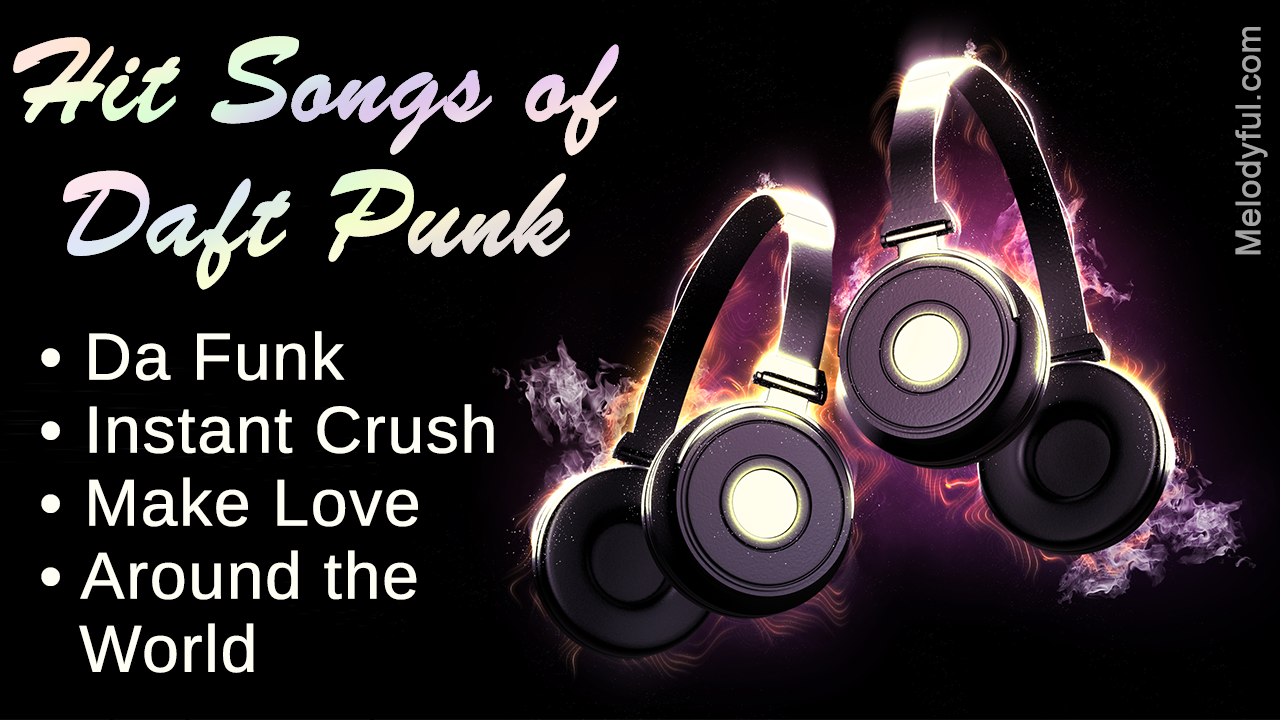 One of the best and most popular duet musicians in the genre of electronic and house music, Daft Punk has entertained millions of fans all over the globe in the last two decades. Read this Melodyful article, which enlists the greatest hit songs of this band, that spawned a new generation of music.

Did You Know?
The Daft Punk duo always wear specially-designed helmets with ventilators and LED effects, robot-like clothes, gloves with a metallic look, etc., during performances, videos, and any other social events like photo-shoots. They mostly do not give any interviews, and it is also rare to see them on television and other media-related events.

In the late ’80s, Daft Punk was formed by Guy Manuel de Homem Christo and Thomas Bangalter in Paris, France, during their school years. In 1992, they had formed a band called Darlin’ with a drummer called Laurent Brankowitz. After a brief period of performing with this outfit, the group disbanded, and Bangalter and de Homem Christo decided to try their hand at something different, thus leading to the birth of Daft Punk. They started to play and experiment with various types of electronic effects and synthesizer elements.

‘Homework’, the debut album of Daft Punk released in 1997, and it became an instant worldwide hit, especially the first proper single of the duet called ‘Da Funk’, and another composition called ‘Alive’. Their second album ‘Discovery’ was released in 2001, and fared even better. ‘Discovery’ featured famous songs like ‘Harder, Better, Faster, Stronger’, and ‘Digital Love’.

Their popularity increased even more with the release of the next two albums, ‘Human After All’, and ‘Random Access Memories’. The latter won five Grammy Awards in 2014. Apart from this, the duo also composed the sound tracks for the movie ‘Tron: Legacy’, in 2010, and these compositions have been immensely successful in the genre of electronic music. The following sections will talk about the top 10 popular songs of this duo. Note that these songs are not listed here in any particular order of ranking or popularity, rather in alphabetical order.

The 10 Best Daft Punk Songs of All Time

In this composition, the only lyrics are the words, ‘around the world’, which are probably repeated more than a hundred times. Characterized by awesome bass lines and techno-pop, this song is surely an unforgettable and evergreen one in the house and electronic genre. The album became quite popular, and this composition was one of the favorite ones to be played in discotheques and clubs at that time. The cyclic and repetitive nature of the song fixes it in your head, and if you watch the Michael Gondry produced video, you will surely feel like dancing right on the spot!

This song is quite different from the other compositions of this album, and features a few NASA recordings of an astronauts talking during the Apollo 17 space mission. This transcript caused a lot of speculation among people, as the astronaut describes an object that is rotating in the air, and is flashing many lights intermittently. Although mistaken to be a UFO, it was later discovered to be a discarded part of a rocket. A lot of synthesizer elements have been used, and distinct electronic layering is present, giving this track a nice warm and spaced-out feel. The electronic arpeggios go on becoming faster as the song advances.

The first composition of Daft Punk, which became an instant hit and aced up the music charts, ‘Da Funk’ is an instrumental composition which has left its mark in the house and techno-pop genre of the late ’90s. The music video was directed by Spike Jonze, and the song featured on the Billboard’s Hot Dance Club Play Charts. The video shows a dream sequence, wherein a guy wears a dog mask, though the interpretation is left wholly to one’s understanding. The structure is mainly composed of drums and synthesizers, with an electronic feel which imparts an awesome and addictive feel to it.

It is impossible not to include at least one composition of Daft Punk belonging to their ‘Tron’ movie album in this list. Derezzed surely makes the cut, and the structure of this song is perfectly recognizable, as it has all the typical elements of this duet. The tune is catchy, and it quickly became synonymous with the movie. The video features both Bangalter and de Homem Christo playing an arcade game, also called ‘Derezzed’, and are in the form of Program 1 and Program 2. The song was released under the Walt Disney label. Daft Punk received a lot of recognition for this song.

In this track, the vocals are done by the duo themselves, whereas, the solos are processed by sound enhancers, and are digitally worked upon and altered. The song has got all the traditional elements of disco, house, electronic rock, and funk. It has a fine robotic feel to it, and intermittent trumpet sounds are also present. Digital Love became an instant hit among the masses with a quick ascent up the music charts. Fans have described it has a composition that uplifts one’s mood, and imparts feelings and emotions of hope, love, and happiness. The song often creates a sense of going on a long journey.

The first single from this album, ‘Get Lucky’ features vocals taken by Pharell Williams (an R&B and soul genre musician). The lyrics have been co-written by Nile Rodgers, and the song is full of funky elements and disco-style tunes. The vocals also consist of few falsetto instances, and the song is regarded as a comeback one, along with the entire album. ‘Random Access Memories’ was released after a hiatus of 8 years, subsequent to their previous album ‘Human After All’. After listening to this song a few times on the loop, you will definitely start feeling lucky.

The vocal melodies in this song are altered electronically, and with a constant cymbal beat, it surely is one of the most popular tracks by this duo till date. It won a Grammy in 2009, and was even made into a remix by Kanye West. The lyrics are precise, and the structure is simple, enough to make you want to get on the dance floor. An insane breakdown in this song is simply the best one of this duo till present. ‘Harder, Better, Faster, Stronger’ maintained its high position on the music charts for ages. With characteristic Daft Punk-style glitches, and robotic tunes, you can surely listen to it repeatedly.

‘One More Time’ is the album’s first single to be released, and the vocals were taken by a French DJ called Romanthony. The song has an amazing funky rhythm and beat to it, and the tunes became a memorable part of the entire album. After hearing it during the initial years of its release, several people have said it induces a happy vibe. It is a popular dance number of Daft Punk, and can be said to be huge favorite on the dance floors across the globe, even today.

Just like the title, this composition is actually on the line of rock, and how it will sound if associated with robots. A very popular song from this album, the cyclic structure of the tunes and heavy rock elements will surely make you want to have this in your collection. The video gained much attention, which shows two robots actually playing rock music. This song was the first single of ‘Human After All’, and though it did not get much attention on the music charts, it became quite famous due to it being a track of this band being released after a long time.

Technologic
Album: Human After All (2005)

With a nice spaced-out beat and rhythm, ‘Technologic’ was released as single No. 2 of this album. It features a repeated electronic voice, along with amazing house elements. The momentum of this song increases as it progresses, and it is a favorite one among the die-hard and core Daft Punk fans. In this composition, the word ‘it’ has been said more than 300 times, with several prefixes and suffixes. The music video was directed by the Daft Punk duo themselves. An iPod advertisement featured this song in 2005. In later years, it was used for some games, serials, and other television advertisements.

Apart from creating world-class compositions, Daft Punk also focuses a lot on visual aspects, while making a public appearance and in live concerts and shows. With the dazzling and futuristic designs of their helmets, clothes, and lights, coupled with anonymous characters, Daft Punk have made a permanent and memorable mark in this particular music genre.